The world is locked in a perpetual cycle of conflict between good and evil—the Guardian and the Paragon bravely defend the world against the Shadow King and his army of monsters. All three have been reborn numerous times throughout history.

Now, the Shadow King has returned once more. But the Guardian and the Paragon are still nowhere to be seen... New heroes must come to Cerulea's aid!

Heroes of Cerulea is an adventure tabletop role-playing game with lo-fi art and rules, and high playability. It's heavily inspired by the classic Legend of Zelda games, and by old-school role-playing.

The full game is on Kickstarter now!

In this game, a key works in pretty much every lock—but it disappears when used. Characters heal through eating food, and for some reason, random pots contain money, arrows, and bombs—and boomerangs can bring those items to you. Monsters are evil; NPCs are focused on one single thing. Dungeons are designed for heroes to solve them.

Heroes of Cerulea embraces those aspects, in order to facilitate a peculiar role-playing experience.

Only players make action rolls. Based on your character's action, pick the most appropriate attribute, and roll as many D4s as your value in that attribute. You read the highest individual die:

Like heroes, monsters have Heart ratings, which varies between different monsters. Each successful attack against a monster depletes 1 of its Hearts—when the monster has 0 Hearts left, it’s defeated. A monster’s attack (normally) depletes 1 of a hero’s Hearts, when the hero rolls a 3 or lower on a combat action roll.

Bosses are like monsters, except tougher and more dangerous. They also have particular action movesets, special abilities, and certain weaknesses—for more memorable and dynamic confrontations.

The game comes with a ready-to-play dungeon: Woodland Temple.

Restless spirits are haunting the Gloomwood, and skeletal monsters have started to terrorize nearby farms. It's said that there is an ancient temple somewhere deep within the woods. Can the heroes break the curse and lay the spirits to rest once more?

The Master pamphlet also includes tools for creating your own dungeons.

When the monsters reset after all the PCs are unconscious, do the keys and doors reset as well or stay open/used?

The idea is that all the keys and doors and chests stay the way they were, and only the monsters reset.
//Lucas Falk

Attacking and Defending. You can lose hearts either way right? Eg. In a one-on-one battle you take turns attacking but other than using a different attribute, both the monster and the character can lose hearts? Is this correct? if instead of attacking you go full defense, you mitigate the lose of a heart on a 3?

Correct! You can’t reduce a monsters Hearts by defending, but while you’re defending you only need a 3 to avoid losing a Heart.

Are you going to enable a license to publish adventures for the game by other publishers?

During the Kickstarter, we unlocked a third party licence, which will allow everyone to freely create and release material for the game. The license will include layout templates, and a digital asset pack of dungeon elements for making maps.

Will the full game include some kind of movememt/range rules? Even abstract ones?

Hi, and thank you!

We’re trying to keep everything minimalistic, and in playtests, it has worked very well only relying on common sense for movement/range. That said, we might work out some simple guidelines.

oops i loved this pamphlet game mode and i would love to translate it to brazilian portuguese, could you give me the names of the fonts used, because i am even looking to support it in KS soon

The fonts used in the playtest quickstart is Press Start 2P for headings, and Windows Command I for body. The full game will be using EnterCommand for both headings and body.

We’re working on a third party license which will allow anyone to create, distribute, and sell content for the game. But the rules and the setting texts won’t be covered by that license.

However, if you’re interested in translating, we would gladly discuss it! Just send us an e-mail, or a message on social media. https://blackfiskpublishing.com/contact/

thank you very much, for now these weeks I am organizing myself with the tests of my university semester, but soon I will get in touch to discuss this proposal more, yes, I believe you would be interested in seeing what we could elaborate with this project.

what does ,If you have 0D or less, roll 2D and use the lowest result mean?

Let’s say you have 1 in a certain stat, and you get a negative modification for some reason. You can’t roll zero dice, so instead, you roll two dice and read the lowest result. For instance, if you rolled a 2 and a 4, your result is 2.

Can stats be reduced below the starting array in any of the quickstart pamphlets?

Love this game, btw, backing on KS for sure.

In the full game, there will be different kin to choose from—and some of them have certain stat bonuses and penalties. And under particularly favorable or unfavorable situations, you might get a modification to your roll.

Thanks for the support!

Thanks so much! Backed at the highest tier and printed my trifolds, created my first hero, psyched!

Last question: Do swords (and special items like the bow) take up pouch slots? 🌟

Haha, no worries, ask as many questions as you’d like!

Happily backed and shared the Kickstarter!

Many thanks for the support!

Played through Woodland Temple tonight and had a blast! A couple questions:
- For "Defend, 3 is enough to avoid Harm", would you still spend Energy?
- Intent on damage for bombs?

- Ah, no, if it’s a purely defensive move, a 3 is enough to avoid all consequences.
- The intent is that bombs can reduce a monster’s Challenge by two steps.

Thanks for the questions! Will make those things clearer in the next update.

Hi, Eric here from Bloat Games.  I'm currently running a Kickstarter for Overworld a Legend of Zelda inspired Monster Manual.  Anyways, I ran across your coming Kickstarter Page and I shouted out your campaign and quickstart in my latest Kickstarter Update.  Best of Luck!  Eric

Many thanks! The Kickstarter looks cool, best of luck with it! 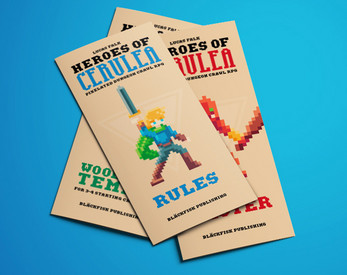 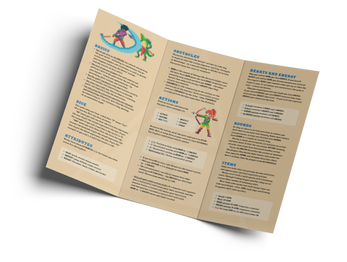 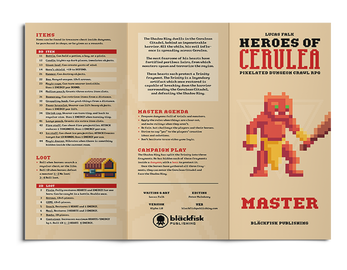 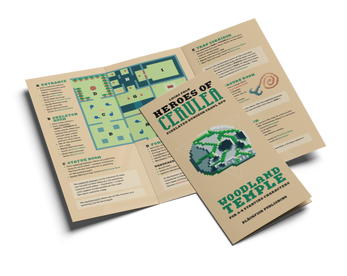